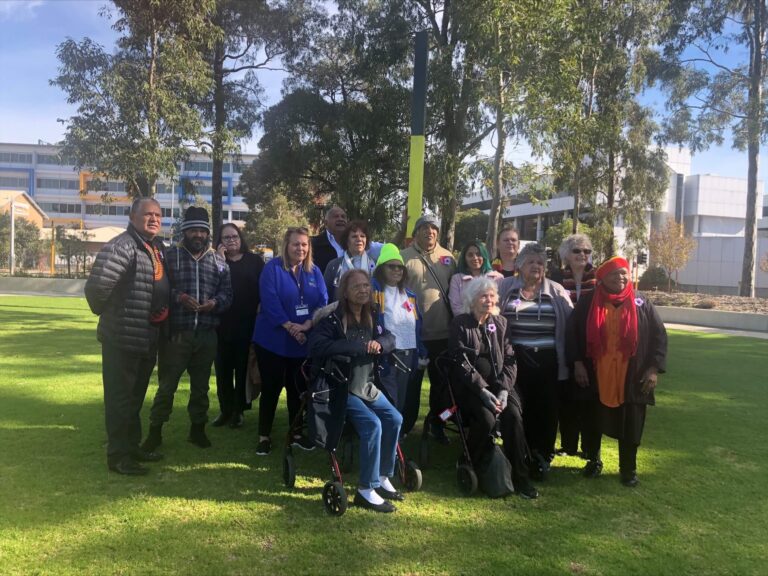 Sorry Day is held each year on 26 May to remember and acknowledge the Stolen Generations.

Dr Alison Atkinson-Phillips is a member of the Bringing Them Home Committee, supported by the Uniting Church WA. She is also the author of ‘Survivor Memorials: Remembering trauma and loss in contemporary Australia’, and worked as Media and Communications Manager at the Uniting Church Centre from 2005 to 2012. She reflects on what Sorry Day means to her.

The Christian year is punctuated by special days when we are asked to pause and reflect on where we are in life, and on our relationship with God. Secular life, too, has some of those moments,and for me, as a Wadjella living on Wadjuk Nyungar boodjar, one of the most important of those is Sorry Day, 26 May. It is a day to tell the truth about the past and present impacts that settler colonialism has had on the first peoples of this land. It is a day to listen to their stories, and to re-commit to working with them for justice.

Sorry Day has been held at Wellington Square in East Perth since 2005, and when I was working at the Uniting Church Centre, it was really easy to pop down to take photos of the events, and to take advantage of the sausage sizzle (or some years kangaroo stew) for my lunchbreak. But that site wasn’t chosen for my convenience – its significance for Aboriginal people dates back before colonisation, when it was part of a wetland chain that ran through the area we now think of as Perth. The significance of this system is commemorated in Toogar Morrison’s ‘Illa Kuri’ artwork in East Perth.

In the 19th century, many of these wetland areas were drained for development, and Wellington Square became a recreation area, and continued to be used by Wadjuk people in its changed form. From the 1920s to the 1950s, Wellington Square was incorporated into the ‘prohibited area’, which banned Aboriginal people from central Perth, and it is probably as a combination of these two histories that many services for Aboriginal people are located nearby in East Perth.

In 2006, Bringing Them Home WA got permission from the City of Perth to install the original Sorry Pole – literally a simple metal pole stuck in the earth on the edge of the square. From that year onwards, a smoking ceremony and walking around the Sorry Pole were incorporated into the ritual of Sorry Day. This ceremony will mean different things to different people; for me it is a way of acknowledging the pain and suffering of the Stolen Generations in particular, and remembering those who have passed during the year.

The surroundings of East Perth remind me both about the individual tragedy of lives lost and families torn apart, and also about the layering of colonial violence on the earth, on culture, on people. Sorry Day, 26 May, will be both different and the same this year. It will be the same, because so many of the 54 recommendations of the 1997 Bringing Them Home report remain  unfulfilled. It will be the same because the need for truth and justice and reconciliation remains as strong as it was 24 years ago.

What will be different, is that we will see the dedication of a formal memorial space, something Stolen Generations survivors and their families have long been advocating for. In fact, it was conversations about the need for a memorial that started me off thinking about survivor memorials, and ultimately led me to start the research that led me out of working for the Uniting Church and into life as a public historian.

What makes this memorial different from almost every other survivor memorial in Australia, is that it will be created by a Stolen Generations survivor herself, artist Sandra Hill. She has taken on the difficult task of creating a space where survivors can publicly mourn their loss, and where the truth of the past can be acknowledged. We all owe her a great debt.

Sometimes people talk about memorials as ‘healing’, but there is a real danger when we use that word; we have an image of a wound closing. The problem is that an act of genocide is not like a paper cut. Separating children from their families and culture has lasting impacts, and it is naïve (at best) to think that a memorial can repair that damage. It is even more important to remember that when the people of Perth recently voted in a Mayor whose policies on removing homeless people from the CBD aren’t all that different from the ‘prohibited area’ policies of last century.

The ‘tag line’ of Bringing Them Home WA is ‘Western Australians for truth, healing, justice and reconciliation’. For myself, on 26 May I will re-commit myself to working for truth and justice. I leave it to my Aboriginal sisters and brothers to decide what healing and reconciliation looks like for them.

Bringing Them Home WA (BTH) and the WA Stolen Generations Aboriginal Corporation (WASGAC) would normally host a major commemorative event at Wellington Square, but due to ongoing COVID-19 restrictions, they have developed an online “event” in partnership with Curtin University. This “online event”, which features interviews with Stolen Generations Survivors and related documentaries from Curtin’s Noongar Dandjoo television program, is available here.