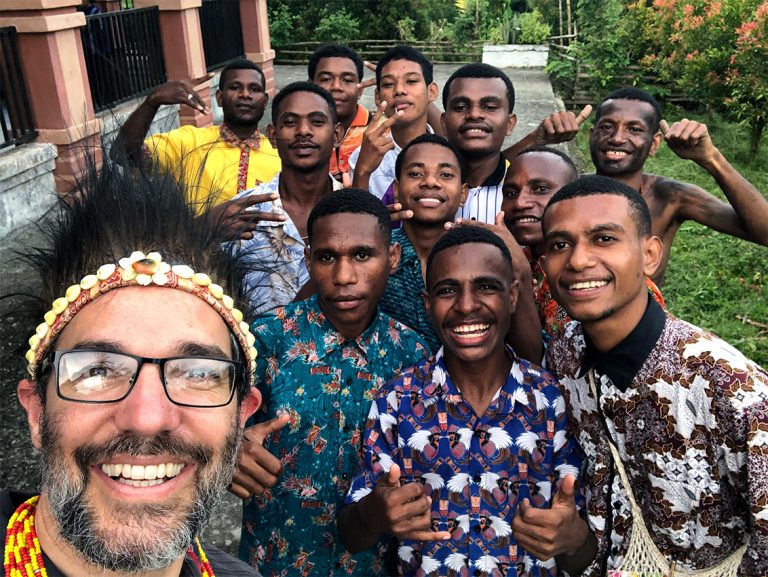 Not many Australians realise that just to our north lies a beautiful and troubled land of abundance and sorrow.

Even trying to name it reveals the turmoil it holds – West Papua is how it is commonly known. Often confused with Papua New Guinea (a different country), it is the eastern most jurisdiction in Indonesia. Or more correctly, according to the Indonesian Government, jurisdictions. Amidst much controversy and resistance from indigenous Papuans, the region was recently divided into five sub-regions. A move understood by Papuans to diminish their collective power, create divisions and competition, while also allowing an increased military presence in each new region. The Indonesian Government argues that it allows more autonomy for local areas and a fairer distribution of funding.

Whichever way the area is defined, its people still rank among the lowest socio-economic indicators for Indonesia. While there is research to suggest that some socio-economic outcomes are improving, this is mostly attributable to the influx of better resourced and educated non-Papuan migrants. Indeed, it is particularly unsettling to watch a new wave of colonialism occurring upon the indigenous Papuan population when in Australia we are only beginning (and still struggling) to realise and remedy the impacts of colonisation on the First Peoples of this place.

I lost count of the number of times I saw during my recent trip to visit our partner church (Gereja Kristen Injili di Tanah Papua), that “oh, that is like what happens/ed to Indigenous people in Australia”. The live action repetition of many of the harms of colonialism is troubling to watch unfold.

And yet, simultaneously, it is because of a prior wave of church missionary activity (which is intimately connected to European colonisation), that I am there at all. Are we therefore part of the problem or the solution? A question worth asking continually, but ultimately best answered by the Papuan people.

But then another question emerges – who are the Papuan people? They are not a homogenous group but a collective of people with diverse cultures, languages, economies and beliefs. There are more than 200 language groups intimately connected to their traditional lands, ranging from highland mountains to lowland swamps and coastal islands, all now also host to growing cities. Most Papuans identify as Christians and it is only on account of the invitation we receive from our partner church that we are able to visit at all. It is notoriously difficult for international media, Non-Government Organisations, or even the United Nations to be granted entry.

While most Papuans and non-Papuans live in relative harmony most of the time, despite differences in religion, education-levels, skills and cultures, you don’t have to look far to see significant disparities.

In the city of Merauke the contrast was most stark. Indigenous Papuans are now in the minority across Papua but according to one local guide, Papuans only account for 30% of the Merauke population. They are largely relegated to the back, the bottom, the outer. Clumps of makeshift housing on the outskirts of the city hover on malaria-breeding swamplands. Papuan women sit on the ground in the market stalls selling today’s catch or gatherings, while the storefronts and businesses are almost exclusively migrant-run.

While officially finished, the “transmigration” program of the Indonesian government incentivised people (mostly Javanese) to move to Papua. The untapped resources and hope of new starts proved enticing to many, resulting in vast waves of people coming to Papua, clearing traditional hunting and gathering grounds for their rice paddies and palm oil plantations. Having more experience in modern Indonesian agriculture, fishing and commerce along with immediate connections to export markets, the ‘transmigrants’ have quickly come to dominate the landscape and economy.

Meanwhile, many Papuans feel like they are being left behind: blocked from employment opportunities, their traditional languages, food and cultural heritage slipping away. Almost outsiders in their own land. Sound familiar?

We must tread so carefully in this context. How does an Australian church help and not hinder? How do we support and not further muddy the waters with our privilege and power? We are by no means perfect in our approach but with great care, continual reflection and deep conversation with the Papuan church by whom we have been invited, we are finding our way.

Indeed, one of the great positives of this trip was how little talking we did. The Papuan people we have been supporting through the Black Pearl Network have now founded their own official organisation: Yayasan Mutiara Hitam Papua (Black Pearl Papua Foundation). They are proudly Papuan and have a strong vision to support Papuan people in accessing vocational training and English education, as well as promoting public health awareness and access to clean water. Our role is to cheer them on, maintain our relationship and send funds and expertise where it is needed.

Hopefully, we can learn from the mistakes of our colonial past and instead play a helpful role in supporting the Papuan church as they invest in the Papuan people.

If you would like to support the work of the Yayasan Mutiara Hitam Papua you can donate via the Black Pearl Network in Australia.